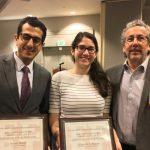 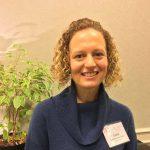 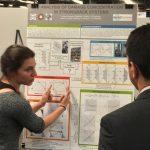 The future of earthquake engineering is bright and was well represented by PEER Core institutions at the recent EERI Annual Meeting, March 7-10, 2017, held in Portland, Oregon.

Barbara Simpson, recipient of EERI’s 2016 Graduate Student Paper Award for “Reducing Concentrations of Inelastic Demand with a Strongback,” explains the improved behavior of this braced frame system. Barbara is a Ph.D candidate at UC Berkeley.

One of the features of the EERI Annual Meeting is the Undergraduate Seismic Design Competition, where student teams from around the world subject their balsa wood tower models to a shaking table.

The Stanford team earned Second place in the competition.

The UC Berkeley team, represented by 29 members (nearly half were freshmen), received the “Spirit of the Competition Award” for their outreach and assistance to other teams. 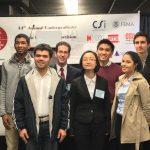