Sponsored by PEER and Cal-OES, the case study project investigated the seismic evaluation and retrofit study of a 35-story steel building designed in 1968. Major seismic vulnerabilities were identified and considered indicative of potential vulnerabilities in similar existing tall buildings built between 1960 and 1990 on the west coast of the United States.

Two primary earthquake hazard levels were used for the evaluations. Additionally, several different numerical models with high fidelity were developed in accordance with recommendations of ASCE 41-13 and other relevant guidelines, and analyses were performed using the program “Open System for Earthquake Engineering Simulation” (OpenSees). Analysis results were evaluated using methodologies and performance criteria outlined in guidelines ASCE 41-13, FEMA 351, and FEMA P-58.  More than 300 sets of sophisticated structural analyses were performed to evaluate the building’s seismic behaviors, and to assess the efficacy of retrofit strategies. 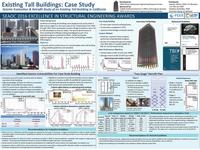 The SEAOC Award jury noted that “this is a really important study.  There is a lot of uncertainty about this. This raises awareness.”