EER has just published Report No. 2014/13 titled “Preliminary Notes and Observations on the August 24, 2014, South Napa Earthquake” as a new addition to the PEER Report Series. The information contained in the report is the result of extensive preliminary field reconnaissance and initial analysis of ground motion records obtained in the days following the South Napa earthquake on August 24, 2014. A large number of faculty, staff, and students affiliated with the Pacific Earthquake Engineering Research Center and other research and educational groups at affiliated campuses have been involved in these studies.

Visit the PEER publications page to download a free color pdf of the document.

Introduction:
At 3:20 AM, on the morning of August 24, 2014, the San Francisco Bay area was shaken by the South Napa, California, earthquake. According to the USGS, the earthquake had a magnitude (Mw) of 6, making it the largest earthquake to strike the San Francisco Bay Area since 1989, when the region was shaken by the magnitude 6.9 Loma Prieta earthquake. The epicenter was located about 8 km (5 miles) SSW of Napa, a city of about 77,000 people. Other nearby cities include American Canyon, Vallejo, and Sonoma. Located on the northern shores of San Francisco Bay, this region is a popular tourist destination and internationally known for its burgeoning wine industry.

While relatively modest in intensity, the South Napa earthquake caused significant ground shaking and damage in the epicentral region. For instance, in the city of Napa alone, around 500 buildings have been yellow-tagged, and an additional 120 damaged buildings have been red-tagged. These numbers are expected to grow as detailed inspections continue.

Preliminary reports from the USGS Prompt Assessment of Global Earthquakes for Response (PAGER) system estimated that economic losses directly attributable to the earthquake damage would likely be in the range of 500,000 to over 1 billion dollars (U.S.). Business interruption and other indirect losses are expected to contribute significantly to the total losses. The actual loss will require some time to determine, but losses to date are sufficient for a Presidential Major Disaster Declaration to be issued on September 11, making damaged facilities owned by certain government and not-for-profit organizations eligible for federal assistance. Although there were no immediate fatalities attributed to the earthquake, one person died about two weeks later due to injuries inflicted as a result of falling debris. Many have postulated that injuries and potential casualties would have been far greater in number if the earthquake had occurred during normal business hours.

Numerous researchers affiliated with the Pacific Earthquake Engineering Research Center (PEER) were quickly deployed to the Napa Valley area immediately following the earthquake. Working in conjunction with investigators from the Earthquake Engineering Research Institute (EERI), Geotechnical Extreme Events Reconnaissance (GEER), the California Department of Transportation, and others, these PEER-affiliated researchers gathered perishable data for use in subsequent investigations to better understand the causes and implications of seismic damage, and to identify effective methods to mitigate future losses due to such damage.

To date, investigative teams have included faculty, research staff, and students from campuses of the University of California at Berkeley, Davis, and San Diego, Oregon State University, and Stanford University. In the field, geotechnical engineering teams focused on the characteristics and consequences of fault rupture, the behavior of soil, levees, and structures supported on vulnerable soils, and dams. In addition, structural engineering investigators focused on damage to various types of buildings, including non-structural elements and contents, transportation facilities, and lifelines systems. Efforts remain underway to identify the consequences of the earthquake on businesses and the local economy. In addition, teams of experts in geophysics, geology, seismology, and engineering examined the characteristics of the strong-motion records and how they relate to current engineering estimates of earthquake hazard.

This report has been compiled from preliminary observations made by some of the PEER-affiliated investigative teams. The sections in this report reflect observations and a sampling of data collected over a short period of time following the South Napa earthquake. The data presented in this report ranges from cursory to a more studied level. It should be recognized that the situation in the field continues to change each day as field investigations continue, and with the consequences of ongoing occurrence of aftershocks, cleanup and recovery efforts, and cordoning and access restrictions. Thus, the material and observations presented in this report are preliminary, and represent the findings of the individual authors alone. As such, the report may contain inconsistencies from section to section, which reflect the restrictions inherent with limited time in the field.

The material in this report includes discussion of:

These preliminary observations provide a basis for the individual authors’ own research, but they also provide useful information in pursuing multidisciplinary research in the earth sciences, engineering, and social sciences. These reports will support PEER’s further development of performance-based earthquake engineering, in particular PEER’s research efforts on Building Systems, Bridges, and Transportation systems, Lifelines, and Seismic Hazards research. They are also being used to identify and assess newer technologies for future reconnaissance efforts. 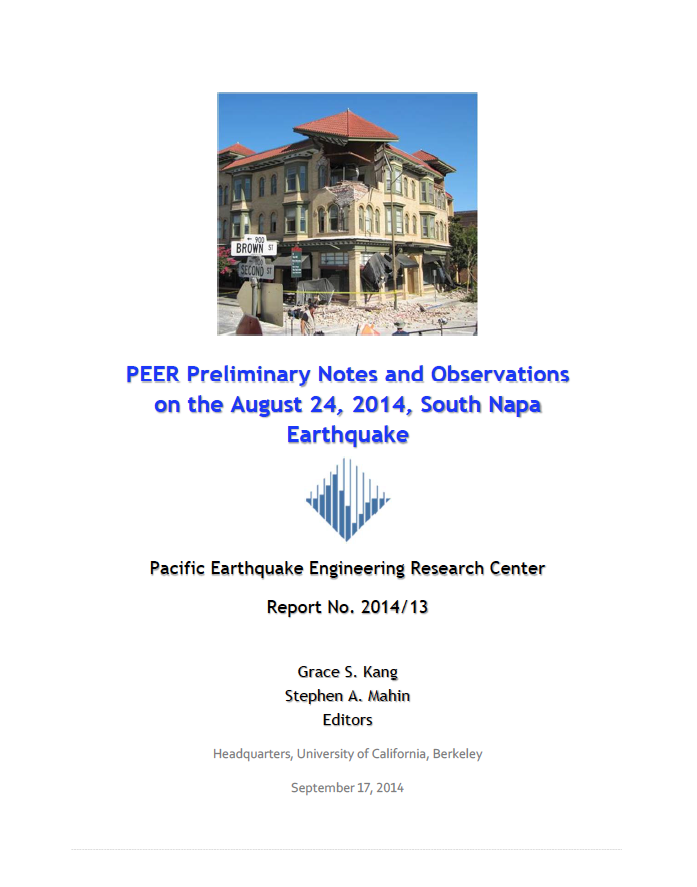