PEER celebrated the 50th Anniversary of the UC Berkeley shaking table on June 24, 2022, at the Earthquake Simulator Laboratory facility at Richmond Field Station. Over 80 researchers, practitioners, former and current students attended the event to commemorate the impact of the table on the field of earthquake engineering.

Tsu-Jae King Liu, Dean of College of Engineering at UC Berkeley, started off the event and emphasized that the shaking table is a living experimental testbed with impact on campus and society. Khalid Mosalam, Director of PEER, praised late Professors Joe Penzien and Ray Clough for their vision to conceive and design a 100-foot x 100-foot table and first resolving the key technical challenges with a “small” prototype, the 20-foot x 20-foot table that continues to serve the field today. While the contributions of the table were invaluable, Mosalam highlighted a quantifiable metric: nearly 1,000 reports produced by EERC and PEER over the past 50 years. He also noted various collaborative projects that are going on in the lab and PEER’s continued contribution to the mission of performance-based earthquake engineering.

Professor Emeritus James Kelly, a pioneer in the field of isolation who conducted research on the table starting from 1972, regaled the audience with his stories from past decades. He credited his sabbatical to New Zealand in 1971 for sparking his interest in earthquake engineering, and the availability of shaking table at UC Berkeley for the experimental research that followed in the fields of seismic isolation and energy dissipation. He succinctly captured the impact of the table as causing the paradigm shift in earthquake engineering from merely considering the problem as one of statics, to recognizing structural response as a dynamic process, thereby resulting in more elegant and effective structural systems and solutions. 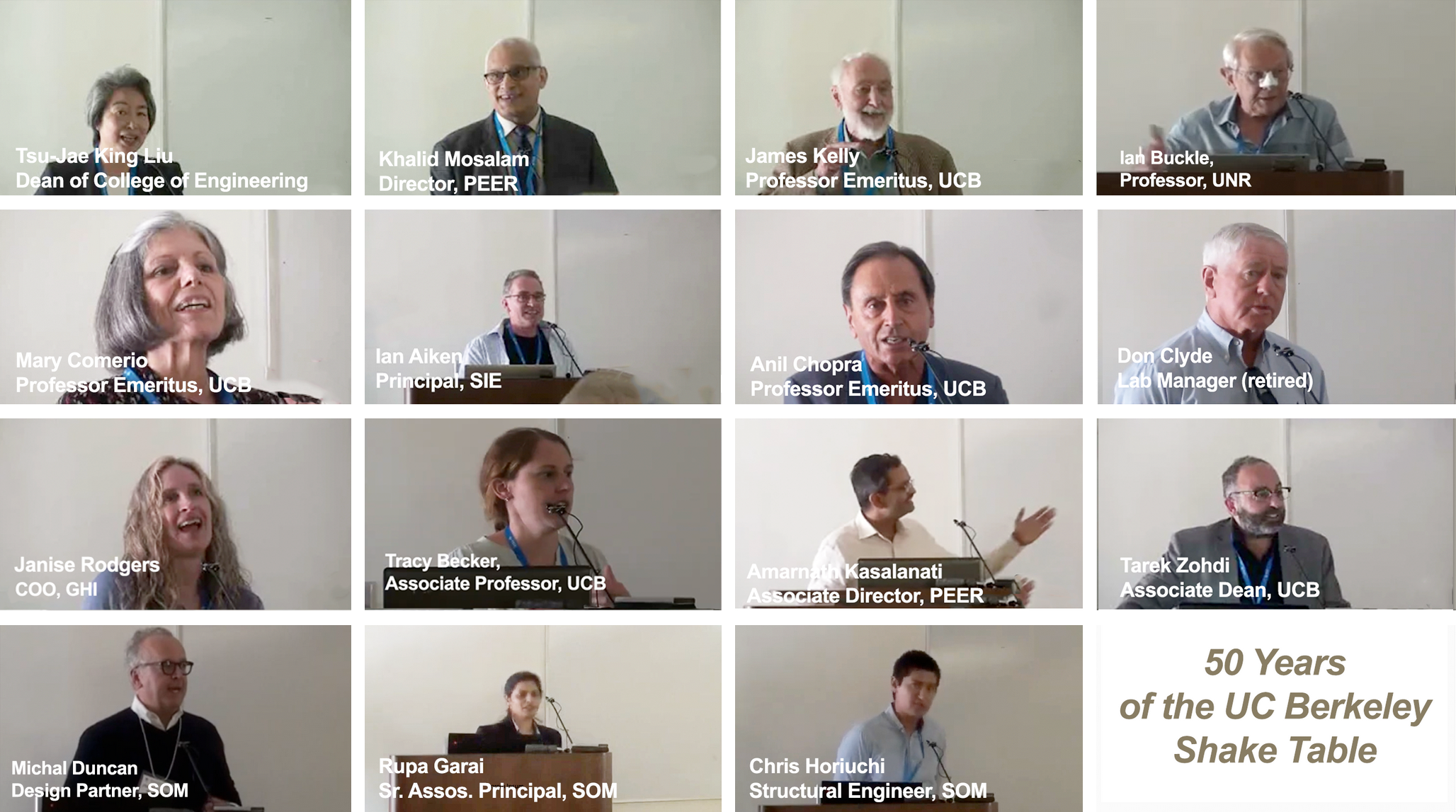 Professor Ian Buckle of the University of Nevada, Reno, discussed tests from 1980s, their immediate impact on codes and how they found their way into practice. He fondly recalled the wine glass test that Prof. Kelly did to demonstrate the effectiveness of isolation, a video of which helped a wide range of people connect with the concept intuitively. Professor Emeritus Mary Comario recounted her early ‘clashes’ with structural engineers because of her focus on the non-structural aspects. She credited the table, with tests of refrigerators critical to biosciences research, as the vehicle that brought about the sea change of recognizing the importance of contents and functionality to the overall seismic performance of a building. Professor Emeritus Anil Chopra, who witnessed all the ideas evolving, taking shape and becoming fully developed reality during his everyday interactions with Joe Penzien in 1967-1972, emphasized the contributions of Dixon Rae. He was a key member of the design team, a hands-on engineer well versed in all of the essential challenges and advances required with mechanical, hydraulic, electronic, computer and data storage systems.

Dr. Ian Aiken, Principal of SIE, covered a wide range of tests that took place on the table spanning the 1970s, 80s and 90s. Consisting of mainly photographs, each with a story behind it, his presentation was a visual complement to Prof. Kelly’s talk. He recalled the resourcefulness of researchers in reusing building structural models, usually resulting in traffic jams in the lab, but getting a lot of mileage out of limited resources. Pointing to the early failure tests of isolators and then to later tests in which bearings could not be broken with available test equipment, he noted the rapid evolution of isolation hardware in just about a decade. He noted how remarkable it is that the shaking table, being a 1/5-scale, proof-of-concept model implemented 50 years ago, is continuing to provide meaningful contributions to the earthquake engineering field today.

Don Clyde, former Earthquake Simulator Laboratory Manager, who spent nearly three decades around the table, recalled the early days of working on it and learning very quickly the challenges of a complex one-of-a-kind mechanical-hydraulic-electronic system that had no user manuals. He stressed that the shaking table was a collaborative effort between UC Berkeley and MTS, with the Berkeley team designing the concrete table and MTS coming up with the degree-of-freedom (DOF) control algorithm. Each innovation came with its downsides, requiring yet another innovation, along with its own issues. For example, the approach of using air pressure to lift the table and test specimen had poor overturning resistance, which required cross-coupled passive stabilizers, which in turn affected the DOF control. Clyde noted that the servo valves being a key component of the simulator, with analog control during early days and digital control later on as the technology progressed.

Janise Rodgers, COO of GHI, mentioned the wide range of projects during the 2000s by former PEER Director Prof. Steve Mahin and his students. She noted the impact of interactions of Berkeley researchers with people worldwide, their sharing of knowledge about the table and the ripple effects of these ties to many corners of the world. Prof. Tracy Becker followed with an acknowledgement of Prof. Steve Mahin and his influential work. Moreover, she stressed the educational contribution of the table, the importance of lab work in helping explore ideas, learning from mistakes and launching the careers of many researchers in the field of earthquake engineering.

Amarnath Kasalanati, Associate Director of PEER, underscored the relevance of the table today by pointing to more than a dozen current projects that are in various stages in the lab. He outlined the plans for future upgrades, which include increasing the table displacement capacity, a hydraulic system upgrade and replacing the original, heavy concrete platen with a stiffer, lightweight steel platen to achieve even higher table performance. He acknowledged the contributions of table operators over the decades, who balanced the challenges of a controlling a complex system with demands of researchers under tight schedules. Prof. Tarek Zohdi, Associate Dean, praised PEER as a unique, multi-faceted, societal gem in the College of Engineering that combines numerical simulations, experimental work, data science and AI technologies. He highlighted future use of the shaking table in the fields of space sciences, aerospace testing, greenhouse testing, and renewable energy infrastructure testing. 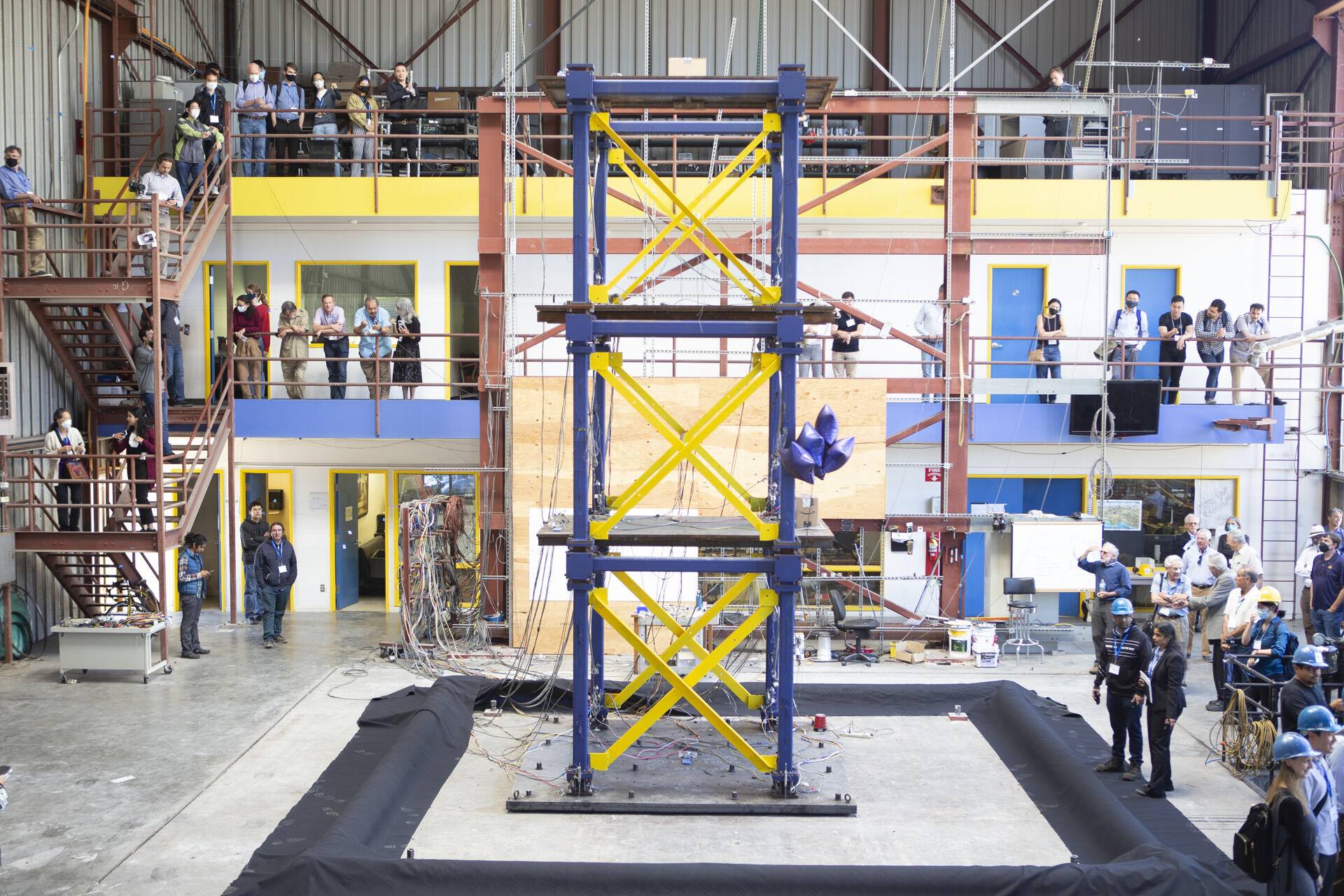 Presentations were followed by a shaking table demonstration test of a 3-story steel structure with shape memory alloy braces. A team from Skidmore, Owings & Merrill, Michael Duncan, Rupa Garai, and Chris Horiuchi, presented the details of the design, and potential use of this technology for a new building in the College of Engineering. After the demonstration tests, visitors mingled over lunch, sharing their favorite stories of the pioneering shaking table that continues to contribute to the field after 50 years.