PEER is saddened to hear of the passing of Lloyd Cluff on June 4, 2019. Lloyd Cluff was a renowned earthquake geologist, consulting with clients to better understand earthquake hazards and their potential impact on the built environment, and to provide measures and policies to manage the risks to an acceptable level. In 2011 he retired from Pacific Gas and Electric Company, where he was Director of the Earthquake Risk Management Program, responsible for managing PG&E's earthquake risks based on understanding earthquake hazards and utility system and component seismic vulnerabilities.

Lloyd Cluff was instrumental in the formation of PEER. In 1995, as the US National Science Foundation (NSF) was preparing to release its announcement of a competition for up to three national earthquake engineering research centers, Lloyd worked on behalf of the California Seismic Safety Commission to ensure that California universities developed a single joint proposal. He then joined the research leadership in its reverse site visit to NSF, contributing to a presentation that ultimately led to the NSF award establishing the PEER Center. 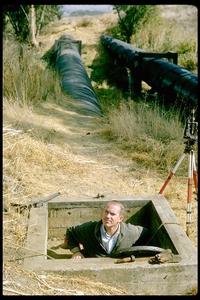 When the State of California's Assembly Bill 1890 deregulated the energy utilities in 1996, Lloyd had the choice of returning monies to ratepayers or pooling that money to create a research fund. Lloyd chose the latter and worked with the young PEER center to establish the PEER Lifelines Program with over $1million seed funding from deregulation. Lloyd continued for many years to serve on the Joint Management Committee of the Lifelines Program, where he continued funding from PG&E, brought in new research sponsors, and provided invaluable industry guidance to the Lifelines Program. That program continues today with robust funding, and it has produced ground-breaking research products such as the NGA earthquake ground motion database and ground motion attenuation models.

“He brought good ideas and good cheer, and never hesitated to tell me how he saw things,” recalls Professor Jack Moehle, PEER’s founding Director. “He had a rare talent, learned through years of personal experience, to provide insightful and critical advice that left the recipient bolstered for doing better work.”

Among his many accolades and recognitions, Lloyd Cluff was elected to the National Academy of Engineering in 1978 for “contributions in identifying active seismic faults and their potential motions with applications to earthquake engineering.” He was Chairman of the California Seismic Safety Commission for two terms: 1988-1990, 1995-1997.  He was President of SSA (1982-1983), President of EERI (1993-1995). President of the Association of Engineering Geologists (1968-1969). In 2002 he was appointed by the Secretary of the Interior to be chairman of the Scientific Earthquake Studies Advisory Committee, a committee mandated by Congress to serve as oversight of the US Geological Survey’s Earthquake Hazards Program; in 2000, he received the John Wesley Powell Award, the highest citizens’ award from the US Geological Survey, for his lifetime contributions to seismic safety and public policies.