The PEER research project to develop bridge design guidelines for tsunami loads has recently concluded and released three reports summarizing the project methodology, investigations, and findings. The project was a multi-campus, multi-disciplinary research program that spanned five years, and it was funded through PEER by a Transportation Pooled-Fund that included Alaska, California, Hawaii, Oregon (lead state), Washington, and the Federal Highway Administration. The Cascadia subduction zone poses a direct threat for a major tsunami that could impact the coastlines of these of these five states.

The purpose of the project was to develop the necessary probabilistic tsunami wave heights in coastal areas of the western states, followed by design guidelines for new bridges to withstand tsunami loads. 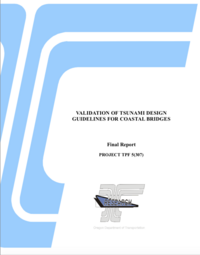 For this project, a map of probabilistic offshore tsunami wave-heights at the 1000-year recurrence interval was created using a Green’s function summation approach. This approach enables the integration over a wide range of source zones and magnitudes and the inclusion of epistemic uncertainties that describe our incomplete knowledge and understanding of natural processes, and aleatory variability, which expresses the randomness in natural processes. The methodology is similar to the common approach in Probabilistic Seismic Hazard Analysis (PSHA). Both methods use an integration over a range of earthquake magnitudes and locations. While PSHA uses Ground Motion Prediction Equations (GMPEs) to compute the ground motion amplitude at a site, the PTHA approach uses numerical models to predict the wave- heights and inundation areas.

Abstract: This paper details a Transportation Pooled Fund Study, TPF-5(307), that included Alaska, California, Hawaii, Oregon (lead state), Washington, and the Federal Highway Administration. The research goal was to update guidelines as a foundation for review by the respective AASHTO sub-committee(s). This report focused on bridges for the Western United States. Five major efforts were completed:

Abstract: This report presents the results of a large-scale experimental investigation of tsunami impact on straight and skewed bridges. The 1:5 scale specimens had realistic structural components and dynamic properties, and were subjected to a range of simplified unbroken solitary waves and more realistic bores. The unique experimental data revealed: (a) the complexity of the tsunami inundation mechanism of bridges and the overloading of the offshore bearings and columns, due to the large overturning moment (OTM) generated by the wave slamming the offshore girder and overhang, (b) the significant difference between the effects introduced by simplified unbroken solitary waves and more realistic bores, (c) the major role of structural dynamics and fluid-structure interaction for the estimation of design forces, and the possibility of dynamic amplification when the bridge is impacted by a bore, (d) the increase of both the total uplift forces and the OTM in bridges with diaphragms due to the air-entrapment, (e) the dependence of the tsunami loads on the bridge type, with box-girder bridges witnessing on average uplift forces 134% higher than those in I-girder bridges, (f) the modification of the hydrodynamic flow caused by solid rails, which increases both the horizontal and downward tsunami loads, and (g) the promising use of air-vents in the deck as a mitigation strategy against tsunamis, in which both the number and the location of the venting holes are optimized in order to maximize the air release. Based on the above findings, the authors developed two simplified methods that can be used for the tsunami design of bearings and other structural components necessary for the survival of straight bridges. While the above findings are applicable to straight bridges, skewed ones witness more complex loads, including significant roll and yaw moments, which should be considered in their design. These moments lead to non-uniform distribution of the tsunami loads to the two supports of the deck and the individual bearings with (i) one abutment having to sustain up to 96% of the total horizontal force, and the other one up to 146% of the total uplift, and (ii) the bearings of the offshore obtuse corner attracting 95% of the total deck uplift.

Abstract: Despite the documented vulnerability of coastal bridges in recent tsunami events, no formal guidance exists to date for the tsunami design of such structures. To contribute to the development of such guidelines, this report presents the results of a numerical investigation into tsunami-induced loads on bridges. Following extensive validation of an incompressible hydrodynamic solver, three existing bridges owned by the Oregon Department of Transportation, are investigated, including open-girder and box- girder superstructures. These analyses revealed that when a bore impacts a straight bridge, large impulsive horizontal (Fx) and uplift (Fy) loads together with an overturning moment about the longitudinal axis of the bridge (Mz) are simultaneously applied to the bridge, increasing the likelihood for severe damage. As the angle of skew increases the magnitude of the impulsive component of these loads decreases, leading to a decreasing trend in Fx, Fy and Mz. On the other hand these structures are also subject to (i) a force normal to the direction of wave propagation, and (ii) moments about the y- and z-axes. The Fz force and the yaw moment My can have a detrimental effect on bridge performance because they generate out-of- plane horizontal loads that can result in unseating of the deck, while the roll moment Mx can overload the structural components (bearings and shear keys) at one end of a skewed deck. Another important finding is that while a tsunami wave that strikes a straight bridge at an oblique angle generates significant three- dimensional effects similar to skewed bridges, such a wave can lead to more severe deck loads due to the interaction of the wave with the bridge abutments and a subsequent channeling effect. Finally, to assist bridge designers, the report presents a simplified methodology for the tsunami design of skewed bridges, and performance criteria for bridges in tsunami-prone areas, based on (i) two tsunami levels, (ii) three bridge operation categories, and (iii) three performance levels to quantify the criteria.