PEER is saddened to hear of the passing of Stephen A. Mahin, former PEER Director, on February 10, 2018. 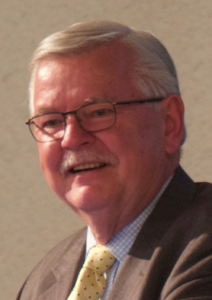 Stephen A. Mahin, the Byron L. and Elvira E. Nishkian Professor Emeritus of Structural Engineering in the department of Civil and Environmental Engineering at the University of California, Berkeley, passed away on February 10, 2018.

Professor Mahin was born in Lodi, California, and attended school in Pacific Grove, California. He started undergraduate studies in Civil Engineering at the University of California (UC), Berkeley in 1964, earning his BS (Honors, 1968), MS (1970), and Ph.D. (1974). He worked as an Assistant Research Engineer at UC Berkeley from 1974-1977, then joined the faculty as Assistant Professor in 1977.  At UC Berkeley, he served as the Chair of the Structural Engineering, Mechanics, and Materials (SEMM) Program (1990-1993), and was Director of PEER – the Pacific Earthquake Engineering Research Center (2009–2015).

In 2016, he became the founding Director of the Computational Modeling and Simulation Center (SimCenter) of the Natural Hazards Engineering Research Infrastructure, funded by the National Science Foundation. Under his visionary leadership, the SimCenter assembled a talented multi-university team of researchers to advance simulation methods to reduce effects of natural hazards on the built environment, with the ultimate aim to inform decision making to improve community resilience to earthquakes, storms, and other extreme hazards. The SimCenter is now under the co-directorship of Professor Greg Deierlein (Stanford University) and Professor Sanjay Govindjee (UC Berkeley), who are humbled by their new role and who intend to carry out Steve’s visionary efforts to transform research in natural hazards engineering.

He recognized the value of seismic isolation and protective systems, and conceived and developed these technologies with the goal of reducing cost and enhancing seismic performance. He was active in adapting supplemental viscous damping, added mass damping, and seismic isolation systems to the needs of actual building projects.

Professor Mahin published hundreds of journal articles, papers, and reports, and the range of topics reflects the comprehensive and broad expanse of his research engagement.

In 1983 he was awarded the ASCE Walter Huber Civil Engineering Research Prize for his practical application of rigorous theory to complex engineering problems. In 1987 he was awarded the Norman Medal by ASCE for his seminal work on the seismic behavior of offshore platforms, and in 2012 he was inducted into the ASCE/OTC Hall of Fame. His pioneering work on self-centering bridges earned him the FHWA James Cooper Best Paper Award in 2007.

The American Institute of Steel Construction (AISC) honored him with its Special Educator Achievement Award in 2001 for leadership in improving steel structures subjected to earthquakes, and its Lifetime Achievement Award in 2013 for sustained contributions to the profession, industry and academia. He was recognized for innovative research related to the seismic behavior of conventional and buckling restrained braced frames as well as moment frame structures. He served as program manager for the six year FEMA-sponsored SAC Steel Project that developed guidelines for the design of steel moment frame structures following the 1994 Northridge earthquake. The SAC guidelines and supporting documents led directly to major changes to the AISC seismic design standards that are used in the United States and worldwide, and that will greatly improve the performance of steel buildings in future earthquakes.

Dr. Mahin served as President of CUREe (1994-1997), Vice-President of the Association for Steel-Concrete Composite Structures (1997-2000), and recently served as Vice President of the International Association for Experimental Structural Engineering. He served as a Director of the Structural Engineers Association of Northern California (SEAONC), and was awarded SEAONC’s Helmut Krawinkler Award (2017) for outstanding leadership in implementing state-of-the-art research into structural engineering practice. The Northern California Chapter of the Earthquake Engineering Research Institute (EERI) recognized Steve as its 2017 Individual Awardee for Leadership, Innovation, and Outstanding Accomplishments in Earthquake Risk Reduction for decades of visionary work in engineering research and teaching.

Dr. Mahin chaired the NEHRP Northridge Earthquake Engineering Research Coordination Program (1995-1997). He worked tirelessly on behalf of the US-Japan cooperative programs, opening the door for US participation in landmark experiments at Japan’s E-Defense facility, resulting in the NEES/E-Defense collaboration. He chaired the NSF US-Japan Cooperative Earthquake Research Program on Composite and Hybrid Structures (1995-1999), and NEES/E-Defense Collaborative Research Program since 2004.

He had a deep interest and unique talent to interact and make friends with fellow researchers throughout the world.  Many international research collaborations with Asian regions including China, Japan, Korea, Singapore, and Taiwan, among others, were initiated and nurtured by his leadership. Over three decades he enlightened, guided, and led multiple phases of US-Japan research collaboration on earthquake engineering using large-scale test facilities operated by the two countries.

Dr. Mahin was named a Master Academician (2014) by Tongji University of Shanghai, China. The title is given to the top 100 professors internationally in all fields of the National Natural Science Foundation of China (NSFC). He was Director of ILEE – International Joint Research Laboratory of Earthquake Engineering, located at Tongji University.

Dr. Mahin was invited to give keynote addresses at several national and international conferences. Notable among his recent addresses was the opening keynote lecture at 16WCEE in Santiago, Chile (January 2017), on “Resilience by Design: A Structural Engineering Perspective.” The lecture reflected his unique perspective which included disciplines beyond structural engineering.

He delivered the opening keynote lecture at the Structural Engineering Frontiers Conference (SEFC17) at the Tokyo Institute of Technology on March 2017, on recent advances in the use of computer-enabled optimization to enhance the seismic performance of existing tall buildings using fluid viscous dampers. The conference brought together more than 200 academic and professional engineering experts from Japan and abroad to discuss emerging trends in structural engineering.

Professor Mahin gave a keynote address at National Center for Research in Earthquake Engineering (NCREE) in Taiwan (August 2017), at the opening of their new earthquake simulation laboratory. Mahin discussed lessons from recent disastrous earthquakes, and their implications for research over the next several decades. He also highlighted recent work by his research group on hybrid simulation using large scale test machines and shaking tables, like those in the new NCREE laboratory.

Steve Mahin’s life includes many achievements, and the list would not be complete without mentioning his sons, Jeff and Colin, two fine men prominent in Steve’s life and heart, and of whom he was very proud.

Professor Mahin was an engaging mentor of numerous students over his long career. His students recall that he taught them to see problems with ten solutions instead of one solution, to always think outside of the box, and to never shrink from sharing new and thought-provoking ideas. A meeting or casual encounter with Professor Mahin could generate ideas leading to decades of research. National and international travel to engage the broad earthquake community were a regular part of graduate student training with Professor Mahin.

During his nearly 50-year career at Berkeley and with international activities, Professor Mahin taught, advised, and mentored generations of students, postdoctoral fellows, research associates and colleagues, and practicing engineers. His broad range of interests also engaged social scientists and stakeholders. His creative approach, collaborative spirit, and enthusiastic generosity in sharing his prolific ideas have inspired everyone who has spent time with him, and he will leave his mark on the profession for years to come.

Condolences to Stephen Mahin’s family may be posted to https://www.kudoboard.com/boards/7GLVh6XL.