LA Magnitude 5.4 earthquake: A Warning to all Californians

The July 29, 2008 earthquake in Los Angeles should be a reminder to the residents of California that large earthquakes are a reality in our state. If yesterday's moderate magnitude 5.4 earthquake had been magnitude 6.4, there would have been considerably stronger ground shaking resulting in more building damage. Larger magnitude earthquakes also are often associated with longer duration -- another potentially damaging factor. While yesterday's effects were predominately damage to building contents, in a larger quake the likelihood of major structural building damage would be high.

The older concrete buildings in question were generally built prior to the modern building code requirements that were implemented in the mid-1970's after the 1971 San Fernando, California Earthquake inflicted major damage to concrete buildings and demonstrated the need for design and detailing improvements. Before the mid-1970s concrete buildings generally were not designed to account for the cyclic effects of earthquake induced motion and as a result they are often brittle, causing sudden collapse without warning. Current design methods require concrete structures to be more ductile so that they can undergo significant damage during major earthquakes without collapse. 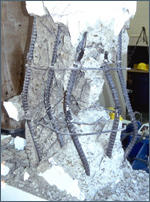 In an effort to fill this knowledge gap, the Pacific Earthquake Engineering Research (PEER) Center headquartered at UC Berkeley, has developed a five year multi-disciplinary project called Mitigation of Collapse Risk in Older Concrete Buildings funded by the National Science Foundation (NSF). The project intends to develop advanced engineering technologies and companion public policy models to distinguish the adequate buildings from the truly dangerous ones, thereby turning an intractable problem into one that can be addressed with available resources. Through this project it is hoped that the earthquake engineering community can reach consensus about which building configurations and features need focused mitigation efforts.

The targeted pilot study region of this project is Los Angeles, where the project is currently conducting an inventory of older concrete buildings. Once the quantity of these building is available it will be easier for the region to develop effective measures to repair these buildings. In addition to identifying these buildings, the project is conducting testing, analysis and modeling to understand the primary issues related to collapse as well as to develop cost effective retrofit methods. Regional simulations will also be performed by researchers at various universities to consider the effects of large earthquakes on the existing building stock.

While all old concrete buildings are not expected to collapse in a major earthquake, it is important to identify ahead of time, which types are the most vulnerable so that they can retrofitted to avoid unnecessary loss of life in the next big CA earthquake. Projects like the one underway at PEER are helping to make this possible.

PEER is a national multi-disciplinary earthquake research center with many short- and long-term research projects ranging from geology, seismology, geotechnical and structural engineering, to the socio-economical impacts of earthquakes. PEER's researchers study engineering characteristics of earthquake ground shaking as well as the seismic performance of lifelines, buildings, bridges, and industrial facilities.