This survey was partially supported by the Pacific Earthquake Research Center (PEER).

Community-based education and awareness programs minimized the death toll from the recent Samoan tsunami, though there are still ways to improve the warning and evacuation process, according to a team of researchers that traveled to Samoa last month. The team, funded by a National Science Foundation (NSF) grant, collected data Oct. 4 through 11 to document the impacts of the 8.1 earthquake and the ensuing tsunami that occurred on Sept. 29. They examined flow depths, runup heights, inundation distances, sediment depositions and damage patterns at various scales. 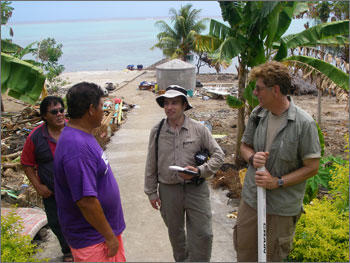 "In addition to timing � the fact that the tsunami struck in the daylight morning hours when most people were on their way to work or school � tsunami education, awareness and evacuation exercises really contained the death toll," noted Hermann Fritz, one of the principal investigators and an associate professor of civil and environmental engineering at the Georgia Institute of Technology. "The technical solution doesn't always work for coastlines near the epicenter with less than 30 minutes between earthquake and onslaught of the tsunami. Earthquakes with a duration of more than 30 seconds serve as a natural warning, resulting in a spontaneous self-evacuation."

Nearly 190 people were killed in the tsunami, with the majority of deaths reported in Samoa, a country governing the western part of the Samoan Islands in the South Pacific Ocean. The two main islands of Samoa are Upolu and Savai'i. American Samoa, a territory of the United States southeast of the sovereign state of Samoa, is comprised of main island Tutuila, the Manu'a Islands, Rose Atoll and Swains Island. The Samoan government estimates the total damage from the tsunami at $147 million. 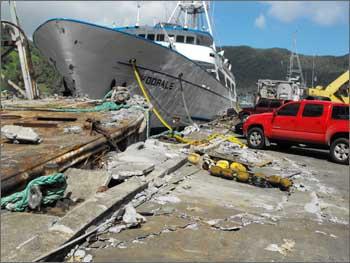 The team's survey data � especially critical in the immediate aftermath since perishable data would otherwise be lost forever � circled all of the main Samoan islands and spanned 350 kilometers from Ofu in the east to Savai'i in the west. They learned that the tsunami impact peaked at Poloa near Tutuila's western tip and Lepa at Upola's southeast coast. Maximum runup heights reached 17 meters at Poloa, and inundation distances and damage were recorded at Pago Pago, more than 500 meters inland. The harbor at Pago Pago, normally well-protected from ordinary storm waves, is a classic tsunami trap vulnerable to long-period tsunami waves.

In addition, researchers noticed a marked difference between the evacuation process in Samoa and American Samoa. While most villagers in Samoa knew to rapidly evacuate after experiencing an earthquake, only a month earlier they had been told that cars help with evacuations, a deadly directive since most roads run parallel to the beach. 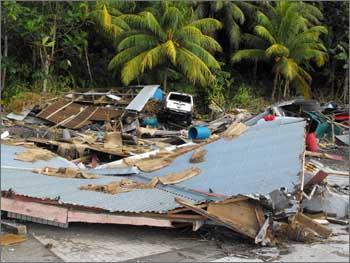 "Many perished trapped inside cars waiting in congested small roads or in long lines behind vehicles stopped by landslides or debris on the road," said Costas Synolakis, principal investigator and professor of civil engineering at University of Southern California. "I have been on more than 20 tsunami field surveys, and in many ways this was one of the most surprising in terms of how carnage varied over fairly short distances. This was also the first time we noted what we suspected: misinformation kills."

Emile Okal, a seismologist and professor of earth and planetary sciences at Northwestern University, conducted approximately 120 interviews with tsunami survivors in 70 different locations around Tutuila and Upolu. He found that most people were educated about tsunamis and knew how to react because of community-based educational programs, not ancestral stories. 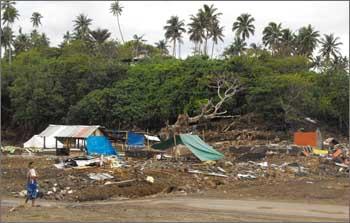 "The last significant tsunami in Samoa occurred in 1917 and was very similar in seismology to the Sept. 29 tsunami. Surprisingly, no one I interviewed said they knew of family members being in a similar situation," Okal observed. "Since the 2004 Indian Ocean tsunami and the 2007 Solomon Islands tsunami, there has been a concerted effort on the part of the local government in American Samoa to post signs and conduct evacuation drills were conducted in some Samoan communities. Many villages were completely destroyed, so I am impressed that the death toll was not larger. The bottom line is education worked."

While Synolakis agreed that the death toll was probably minimized due to educational efforts, he said there is still a lot of progress that can be made. While working in the field on Oct. 7, the team experienced a real tsunami warning and witnessed first-hand the tremendous confusion and disorganization that followed. 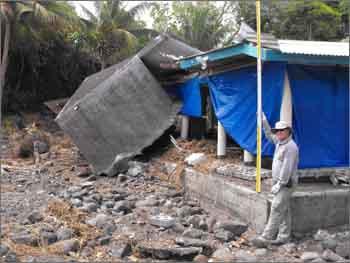 "Although there are warning signs along the beaches in American Samoa, there is no information about where the evacuation routes are," he said. "It's also just as important to let people know when it's safe to come back as it is to warn them. We definitely have our work cut out for us."

The collected field data serves as benchmarking and validation of numerical tsunami models with wide-ranging applications including forecasting, warning and sediment transport. The researchers will present their findings at special sessions at the American Geophysical Union Fall Meeting in San Francisco this December. Brief publications summarizing the immediate results will follow in research journals.