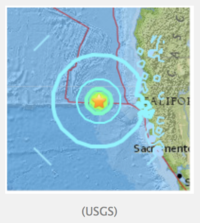 This morning a M6.5 (downgraded from M6.8) earthquake was recorded off the California coast about 100 miles west of Ferndale, near a divergent fault. Such earthquakes trigger tsunami warnings. There was no reported damage an hour after the earthquake, and the tsunami warning was lifted.

Three hours later, a M7.8 earthquake shook offshore from the Solomon Islands. Although the tsunami threat was lifted in Hawaii, the coasts of South Pacific islands including the Solomons, Vanuatu, Papua New Guinea were expected to be effected in the following few hours. Powerful aftershocks continue in the area, and communication difficulties hinder clear information about possible damage.

Yesterday morning, in the Aceh Province of Sumatra, a M6.5 earthquake struck, toppling numerous homes and buildings, resulting in more than 100 deaths as well as widespread damage to buildings including mosques and a school. Numerous aftershocks continue to rock the area. This region was previously devastated by the tsunami that followed the M9.1 earthquake in 2004.

These recent major earthquakes remind us that mitigation and response plans are needed at individual and community levels. Moreover, proactive planning for robust lifeline operations, communication and transportation networks, and building safety can reduce the shocking impact of such events, resulting in communities recovering more quickly.