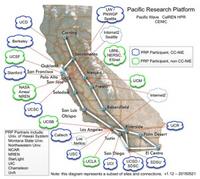 PEER is a formal partner in the consortium that was just awarded a five-year $5 million dollar award from the National Science Foundation.  The award was made to UC Berkeley and UC San Diego, a group of West Coast universities, laboratories and supercomputer centers, who will soon have the ability to move large amounts of research data securely tens or hundreds of times faster than is currently possible across an ultra-high-speed fiber optic network called the Pacific Research Platform (PRP).

The high-speed network will connect all 10 University of California campuses and 10 other universities and research institutions in several states, as well as other national and international networks. The hope is the network will accelerate the rate of scientific discovery by allowing researchers and scientists access to data when and where they need it with end-to-end 10-100 gigabits per second (Gb/s) connection speeds.

“PEER is pleased to be on the PRP Science Team for Earth Sciences Data Analysis, focusing on data analysis and simulation for earthquakes and natural disasters,” said Steve Mahin, PEER Director.

The network, which will not be directly connected to the Internet, will not only enable fast data transmission, but will also allow for new kinds of distributed computing for scientific applications. Since the network allows for high-speed links, data can remain in one location and easily accessed at high-speeds from remote locations, allowing researchers to work with their collaborators’ labs or from remote data centers.

Further, the new network, which will be separated from the general purpose campus network and an extension of three existing advanced networks – CalRen, ESnet, and Pacific Wave – will use hardware security components to protect data it from attacks common to computers connected to the Internet.

For more information see http://www.calit2.net/newsroom/release.php?id=2554 from the California Institute for Telecommunications and Information Technology, and see http://www.nytimes.com/2015/08/01/science/research-scientists-to-use-network-much-faster-than-internet.html?_r=1 from the New York Times.