A Busy Summer of OpenSees: New Elements, New Tools, and Lots of Training!

The 2013 summer was a busy time for OpenSees! Many new code modules were added as a part of a new version release, several training sessions for over 200 users and developers were conducted, and OpenSees Challenge winners have been announced for the best code additions in the last year. See below for details on these exciting developments:

OpenSees Version 2.4.2 has been released

Over 20 new community-developed code modules have been added to the source code in Version 2.4.2 that was released on September 23, 2013. For example, new modules for modeling reinforced concrete shear walls were developed jointly by researchers at Tsinghua University in China and an industry practitioner working at Arup in the United States. Other researchers contributed various models for isolation bearings made from several materials, transient integrators, dampers, concrete material models, concrete reinforcement materials, plasticity models, and much more. For more details, view the OpenSees Change Log.

The 2013 winners of the OpenSees Challenge are:

New Code Development: Sarven Akcelyan (McGill University, Canada) for Viscous Damper Material (http://opensees.berkeley.edu/wiki/index.php/ViscousDamper_Material). This new uniaxial material titled “ViscousDamper” accounts for the axial flexibility of a viscous damper based on the solution algorithm adopted from Oohara and Kasai in 2002.

OpenSees Powered app on NEEShub: Mark Denavit (Stanley D. Lindsey and Associates, Inc., Atlanta) for Steel Portal Frame Analyzer. By examining the global behavior of a relatively simple one-story one-bay moment frame, users running this tool are exposed to the differences between elastic and inelastic analyses and first-order and second-order analyses. Additional comparisons can made to explore the effects of geometric and material properties, relative magnitude of lateral loading, and finite element discretization. 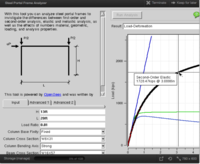 Congratulations to the winners and to all the developers. Over 40 pieces of new code were submitted in the past year!

Training: OpenSees Days and OpenSees On The Road

NEES and PEER hosted OpenSees Days 2013 at the University of California, Berkeley Richmond Field Station (RFS) in Richmond, CA on August 26 and 27, 2013. Over 40 students, researchers, and practitioners attended.

The 2013 workshop was redesigned to include more hands-on activities. The first day of activities, called “Getting Started with OpenSees,” was intended for beginning users. Instructional morning sessions introduced users to the tcl scripting language, and basic modeling and analysis techniques using OpenSees. The afternoon was devoted to hands-on exercises to ensure attendees could perform simple simulations using OpenSees.

Intermediate users were the target audience for the second day, with the workshop focus shifting to structural and geotechnical modeling using OpenSees, and how users can extend OpenSees to meet their own research needs. New code developments in the areas of the particle finite element method and optimization were also presented to these experienced users. These activities were followed by industry presentations on how OpenSees is used and extended by practitioners.

Feedback from the workshop evaluations shows that the event was well received. One experienced user wrote “every OpenSees Days workshop that I have attended has new or more information on modeling and analysis, new elements and materials added to OpenSees and is evolving well each year. It is worth coming to every year.” New users also found the workshop helpful. One new user reported, “The workshop was very instructional and gave a great overview of the capabilities of OpenSees.”

For those who cannot attend UC Berkeley for the workshop, or who have large groups of potential users/developers needing training in one location, the OpenSees Team has begun conducting OpenSees On the Road training sessions. This training can be customized for particular groups and provide quality one-on-one time with the instructors for specialized questions, as was done for the University of Nevada, Reno in 2012. During the summer of 2013 two groups took advantage of this opportunity.

Over 150 participants attended an OpenSees On the Road workshop at Harbin Institute of Technology, Harbin, China, on August 21, 2013. Intermingled with basic OpenSees instruction were a number of presentations by Chinese researchers on research they are doing with OpenSees and new developments they are creating for OpenSees.

On September 26-27, 2013, Frank McKenna will be conducting another OpenSees On the Road workshop at Virginia Tech. Thirty participants have signed up for the workshop that will focus on training new users to enhance their ability to use OpenSees for their research projects.