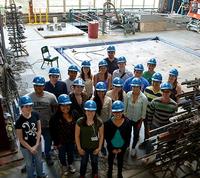 Twenty PEER interns traveled from their host universities to UC Berkeley to participate in the program’s orientation session from July 1 – 3, 2013. Over three days the interns were exposed to new ideas and expanded their skills to allow them to succeed in this summer’s internship program and in their future educational pursuits. A resiliency workshop, graduate school admissions workshop, library literature review training, research ethics discussions with case studies, report writing workshop, lab tours, and a poster communication workshop were included in the 2013 orientation activities.

Two sessions of the orientation were focused on a preparation for and admission into graduate school. This started with a long

discussion session with Structural Engineering Professor Filip Filippou and Joan Chamberlain, Undergraduate Counselor for Civil and Environmental Engineering at UC Berkeley. They shared many insights with the students about applying to graduate school, including how to write a strong application/personal statement, what types of reference letters to get, and how students can fund graduate school for a masters or PhD program, while also fielding many other questions from the interns. This was followed by a informal Q&A with graduate student Cristian Acevedo from Stanford and graduate student Barbara Simpson from UC Berkeley, who shared their own paths to a PhD and gave valuable advice to the interns.

The theme for this NSF-funded REU site, hosted by the PEER Center, is “Engineering Earthquake Resilient Communities,” so the orientation included a workshop discussing the concept of resiliency and how it applies to earthquakes. In preparation for this workshop, students were given several papers to read before Professor Stephen Mahin, the REU PI, shared some of the ongoing PEER research that is aimed at achieving earthquake resiliency. This was followed by an interactive discussion with the interns further discussing the reading assignments, presentation topics, and their own interpretations, which was led and moderated by PEER Outreach Director and REU Coordinator, Heidi Tremayne.

The combination of assigned reading and presentation was favorably viewed by most of the interns. In a follow-up survey, one intern wrote “the assigned readings for the orientation were very interesting as they helped me gain a good understanding of the concept of resiliency.” This was echoed by another intern who wrote “readings and presentation helped me understand the many facets resiliency has in the community sphere.” For many, it was the first time that they had thought in depth about the concept of resilience and its impact on communities. One reported that the workshop “introduced some aspects of resiliency I hadn’t thought of before,” while another noted “I had a general understanding of the concept, but had never really thought in depth about what that means for us as civil engineers.” These comments show how this activity challenged the interns and expanded their horizons.

Tours of various earthquake engineering labs at the Richmond Field Station, including the Earthquake Simulator Lab with UC Berkeley’s large scale shaking table and the nees@berkeley lab, exposed the interns from other campuses to other state-of-the-art laboratory facilities and research projects.

NISEE Librarian Chuck James gave the interns a crash-course on library research and literature review methods and resources. Chuck was followed by Claire Johnson, the PEER report editor, who gave the interns a hands-on tutorial with the PEER report template. Claire shared various formatting, style, writing and referencing tips that will help the students write outstanding papers to be published as a compendium in the PEER Report Series at the end of the summer.

Topics in research ethics including research misconduct, authorship, mentor relationship and data integrity, were made real to the interns during a ethics workshop hosted by REU Coordinator Heidi Tremayne through the use of videos, case studies, acting role plays, and in-depth discussion. 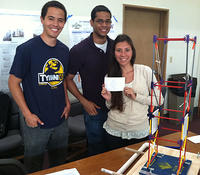 The interns ended the program by participating in a poster presentation session that included a sample poster review activity. Interns were given poster samples from previous summer interns to review and score. The subsequent discussion quite effectively exposed some important poster design elements that the interns can use during the design of their own research posters at the end of the summer. The PEER interns will present their research findings during a poster session at the Northridge 20 Symposium in January 2013 that is being aligned with the PEER Annual Meeting.

The 2013 orientation program was a great success and provided important training for the interns in a variety of topics that will prepare them for both their summer research projects and future careers in academia or industry.