All twelve 2012 PEER interns traveled from their host universities to UC Berkeley to participate in the program’s orientation program from June 21 – 23. During two full days of activities, the interns were exposed to new ideas and expanded their skills to allow them to succeed in this summer’s internship program and in their future educational pursuits. Included in the program was a resiliency workshop, graduate school workshop with information on the admissions process, library literature review training, research ethics discussions with case studies, and a poster communication workshop. 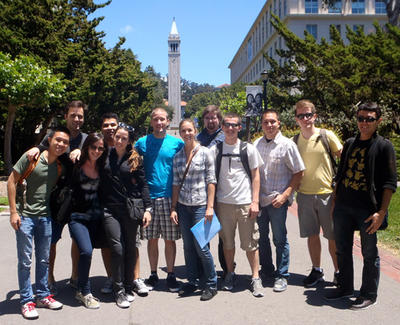 The theme for this NSF funded REU site, hosted by the PEER Center, is “Engineering Earthquake Resilient Communities”, so the orientation began with a workshop discussing the concept of resiliency and how it applies to earthquakes. Professor Mahin, the REU PI, gave a presentation that broadly discussed how resiliency relates to sustainability and how both are largely impacted by earthquake performance. His discussion was followed by presentations by all the graduate student mentors about how their graduate-level research projects relate to the concept of resiliency. The group of mentors included Nathan Burley and Adam Price from UC Davis, Samuel Sideras, Olafur Haraldsson, and Jonathan Weigand from the University of Washington, and Duy Vu To and Vesna Terzic from UC Berkeley.

From this Resiliency Workshop, one intern report “Not only did I learn the technical definition and goals of Resiliency but it was also great to hear about different research going on in earthquake resiliency form self-centering columns to the base isolators.” Another intern really appreciated the multidisciplinary element of the session, “I was aware of the geotechnical aspects of earthquake resiliency but learned more about the structural aspects and how we can affect them.”

Tours of various earthquake engineering labs at the Richmond Field Station, including the Earthquake Simulator Lab with UC Berkeley’s large-scale shaking table and the nees@berkeley lab, added excitement to the first day of the orientation. The interns were lucky to see the new nees@berkeley hybrid shaking table in action during a demonstration organized by the NEES staff including PI Professor Khalid Mosalam and Site Manager Shakhzod Takhirov. 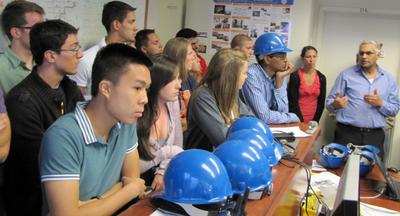 Interns watch a demonstration of the nees@berkeley lab's new hybrid shaking table from the control room during a tour of the PEER earthquake engineering labs at UC Berkeley. Professor Khalid Mosalam (right), nees@berkeley PI, explains the demonstration to the full group which included PEER Interns, the NEES interns from University Nevada Reno, along with several other engineering professionals.

PEER Director Stephen Mahin (second from left) joins interns to watch a demonstration of the nees@berkeley lab's new hybrid shaking table during a tour of the PEER earthquake engineering labs at UC Berkeley.

A half day of the orientation was focused on a graduate school workshop. This started with a long discussion session with Shelley Okimoto, Graduate School Admissions Counselor for Civil and Environmental Engineering at UC Berkeley. She discussed things to consider when applying to graduate school, how to write a strong application, what types of reference letters to get, how students can fund graduate school for a masters or PhD program, and many other questions from the interns. This was followed by a graduate student panel of five UC Berkeley graduate students from both the structural and geotechnical engineering programs.

The grad students who participated in the panel thoughtfully shared their experience, impressions and gave valuable advice to the interns. One intern especially appreciated this experience: “The opportunity to just speak with students who have gone through what we are going through and to hear their unique perspectives on graduate school was extremely helpful. Also their variety of backgrounds from those who went straight into a PH.D program to those who worked first and them came back to school. Also, the length of the panel was spot on. I was at first concerned that we would run out of questions but it just really couldn’t have gone any better.”

NISEE Librarian Chuck James gave the interns a crash-course on library research and literature review methods and resources. Due to his careful advice and long experience, his resources will serve these students during their internship and into grad school or the engineering profession. Interns were encouraged to use the summer to figure out the top 3 journals in their fields and read, read, read to get ahead!

With help from Claire Johnson, the PEER report editor, the interns were equipped to start writing their research papers. Claire shared various formatting, writing and referencing tips that will help the students write outstanding papers that will be published as a compendium in the PEER Report Series at the end of the summer.

Topics in research ethics including research misconduct, authorship, mentor relationship and data integrity, were made real to the interns during a 3-hour ethics workshop hosted by REU Coordinator Heidi Tremayne (formerly Faison) through the use of videos, case studies, acting role plays, and in-depth discussion.

On the final day of the program, interns actively participated in a poster presentation session during a lively a sample poster review activity. Interns were given poster samples from previous summer interns to review and score. The subsequent discussion quite effectively exposed some important poster design elements that the interns can use during the design of their own research posters at the end of the summer. The PEER interns will present their research findings during a poster session at the PEER Annual Meeting in October 2012.

The 2012 orientation program was a great success. It provided a unique and interactive experience for both interns and mentors to network with each other while subsequently learning useful research skills that will continue to serve them in the future. 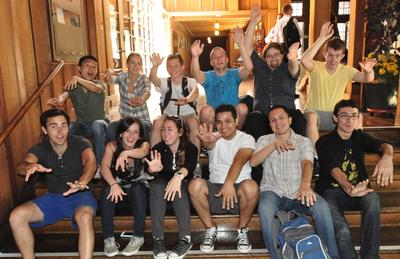 All twelve interns show how much fun it is to be doing research as a part of the 2012 PEER Internship Program!