Four of the interns hosted at UC Berkeley for the 2010 PEER Summer Internship Program were also participants in the 2010 NEES REU program. In addition to their participation in the PEER Intern activities, they also were able to attend the NEES REU Orientation in Reno on June 24-26, 2010 and the NEES REU Young Researcher Symposium in Chicago on August 18-19, 2010. 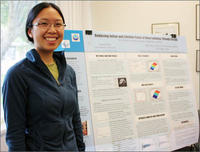 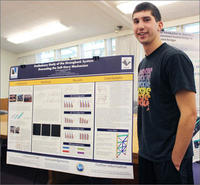 These four PEER participants did a great job a the NEES Young Researcher Symposium, and won 6 out of 7 awards that were bestowed at the symposium�s poster session.

Best of Session awards given to PEER students Ariel Creagh for Session 1, Ray Hooft for Session 3, and Cristian Acevedo for Session 4.

"Best use of graphics" was awarded to Ariel Creagh.

"Best Overall" was awarded to Cristian Acevedo. For this award, Mr. Acevedo also received a funded trip to the NEES/PEER Annual Meeting, Quake Summit 2010, in October!

Such exemplary performance amongst their peers shows the dedication of the interns and the involvement of their mentors to ensure their research work was successful. Special thanks to mentors Jack Moehle, Wael Hassan, Ahmet Can Tanyeri, Steve Mahin and Jiun Wei Lai.

Congratulations to the interns and thanks to NEES for planning the symposium and for supporting these students through their REU Program!