On the two month anniversary of the April 16, 2016 Ecuador Earthquake, PEER hosted a seminar about Post-Earthquake Reconnaissance Observations.

On Saturday, April 16, 2016, at 6:58pm local time, a M7.8 earthquake struck on the subduction region of western Ecuador near the city of Pedernales.

The seismic event resulted in the loss of 660 lives, more than 27,000 injured, and more than 30,000 people displaced from their residences. The earthquake produced ground motion with peak ground accelerations in excess of 1.4g, peak ground velocities of more than 100 cm/s, and records with durations of more than 250 seconds.

PEER researchers from the John A. Blume Earthquake Engineering Research Center at Stanford University and from UC Berkeley spent one week in Ecuador conducting an earthquake reconnaissance and summarized recorded ground motions as well as the seismic performance of buildings, bridges, dams, highways, and critical facilities such as hospitals. Some of the structures they visited include one of the longest seismically isolated bridges that has been subjected to a major earthquake, and damage was observed at one of the most important ports in the country. Many major landslides occurred along the coast, which could have important consequences for California where important highways and structures are located on or close to slopes where similar landslides could occur.

The researchers summarized the rapid post-earthquake evaluation and tagging that was conducted by Ecuadorian engineers, and discussed how smartphones facilitated this task for capturing images, geolocating structures and creating centralized databases, often in real-time.

The following questions from the online audience and responses by Professor Miranda were not included during the seminar, due to lack of time:

Q: What was the predominant frequency estimated for the PGA recorded at the city of Guayaquil, and the epicentral distance? Was there on rock or soft soil?

A: There were three stations that recorded the event in the city of Guayaquil, located approximately 270 km from the epicenter. One station is on rock and the other two on very soft soils. PGAs on rock were in the order go 0.02g while on soft soil they were between 0.06g and 0.1g that is, approximately between 3 and 5 times larger than those recorded on rock.

Q: What was the max PGA measured at the closest distance to the epicenter and also the predominant frequency?

A: The largest PGA was recorded in the city of Pedernales, approximately 20 km south of the epicenter. The predominant frequency was somewhere between 4 and 6 Hz. The PGA of 1.4 is associated with a very high frequency. Once the record was filtered to eliminate frequencies higher than 30 Hz the PGA was reduced to about 1.05g

Q: About Los Caras bridge, the detailed presentation was instructive. I realised that the seismic action can generate asymetric displacement of the friction pendulum bearing, although structurally beneficial, but with in some cases final permanent displacement. Will it be necessary to reinstall the deck and the FPB at their initial positions or to replace the affected FPB? What was the orientation of the main displacements of the bridge relatively to the direction of the fault rupture?

A: I understand that two seismic isolation bearings will be replaced. But I do not have detailed information. We were not able to get to the bearings. The photos we shows were taken with powerful telephotos. In those photos we only observed failure of the seals protecting the bearings from dust and dirt entering inside the bearing. Those seals are relatively easy and inexpensive to replace.

Q: Was there some observed damage on the electric lifeline infrastructure i.e. in the substations and transmission lines towers.

In most locations power was recovered within three days of the event.

Q: Very interesting the comparison was made between the soil behaviour during the earthquake of 1985 ( Mexico), 1989 (San Francisco) and 2016 (Ecuador) earthquakes. In fact, the destroyed buildings in Guayaquil clearly recall the great damage far from the epicenter recorded to medium height buildings on profound and very soft deposit in Mexico city in 1985. What was the mean predominent frequency of this deposit? What was the mean shear wave velocity or density, and the mean depth of this deposit?

In Guayaquil clay deposits are also very soft, but their water content and plasticity is lower than those in Mexico City. In the upper 40 m, clay deposits in Guayaquil can have shear wave velocities as low as 120 m/s.

Q: There were a lot of failures on masonry infills in Manta, Portoviejo, Guayaquil but not structural failures?

A: Indeed most of the damages were non-structural in masonry infills used as interior partitions of in facades, but there was also a large amount of structural damage especially in Pedernales, Portoviejo and Manta.

Q: Do you think we need to re-think drift limits and strength reduction factors?

A: Not necessarily, but it would be good to at least study that possibility. Combining large strength reduction factors such as 8 together with drift limits of 2 or 2.5% results in very flexible structures. When those structures have non-structural components with low deformation capacity the result is not good.

Buildings in Japán, China, Mexico and many other countries are significantly more rigid than those in Ecuador or those in the United States.

Experience from both the 1985 and 2010 Chile earthquakes has clearly showed that buildings with reinforced concrete structural walls are significantly more rigid and therefore they experience much smaller lateral deformation demands and damage during earthquakes. 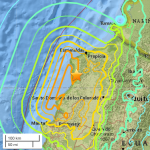