PEER is saddened to hear of the passing of Vitelmo V. Bertero on October 24, 2016. 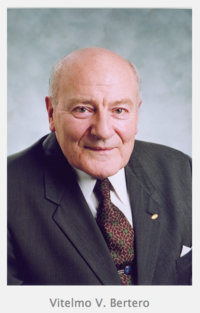 Vitelmo V. Bertero was professor emeritus of civil and environmental engineering at the University of California, Berkeley. Professor Bertero was a world-renowned pioneer, expert, and leader in the field of earthquake engineering.

In 1947 Bertero received his degree in Civil Engineering from the Facultad de Ciencias Matemáticas, Físico-Químicas y Naturales, Universidad del Litoral, Rosario, Argentina, his native country. He received his M.S. and his Sc.D. degree in civil engineering from Massachusetts Institute of Technology. In 1958 he joined the Department of Civil Engineering at UC Berkeley, where, from 1988 to 1990, he was the Director of the Earthquake Engineering Research Center at Berkeley, the predecessor to PEER – Pacific Earthquake Engineering Research Center, and a hub for analytical and experimental earthquake engineering research, information resources, and public service programs.

Professor Bertero published more than 350 papers and reports on various issues in earthquake engineering and received numerous national and international awards for his teaching and original research efforts. For decades he collaborated on joint research with his colleague at UC Berkeley, Egor Popov.

In 1990 he was awarded the Berkeley Citation, UC’s highest honor. Among other awards in the US, he received the ASCE Nathan Newmark Award (1991); ACI Arthur Anderson Award (1989); AISC T.R.Higgins Lectureship Award (1990); and EERI Housner Medal (1995). In 1990, Engineering News Record recognized him as the “Construction Man of the Year” for “advancing the science of earthquake engineering,” and described him as the “impassioned professor who advances earthquake engineering through research.”

His international awards and honors include the Jai Krishna Award from the India Society of Earthquake Technology (1974); First International Gold Medal Eduardo Torroja from the CSIC, Spain (1989); appointment as the Extraordinary Chair of Javier Barrios Siera at the National University of Mexico (1986); appointment as Honorary Professor in seven universities in South American countries; and Honorary Doctoral degrees including “Doctorado Honoris Causa en Ingeniería” from the University of Los Andes, Mérida, Venezuela (1993), and from “CUYO” University, Mendoza, Argentina (1997).

From 1988 to 1992 he was a member of the Advisory Committee to the United States Congress regarding the National Earthquake Hazards Reduction Program (NEHRP). From 1992 to 2000 he was a Director, representing the United States, of the International Association of Earthquake Engineering (IAEE).

In 1997 the EERC-CUREe Symposium in Honor of Vitelmo V. Bertero was held at UC Berkeley, where a global assembly of individuals and organizations of researchers and engineering practitioners participated during the two-day event.

In 2004, Professor Bertero co-edited the comprehensive book Earthquake Engineering: From Engineering Seismology to Performance-Based Engineering, (CRC Press, 2004). In 2006 he was named one of the “Top 10 Seismic Engineers of the 20th Century” by the Applied Technology Council and Engineering News Record. In 2007, he co-founded BFP Engineers, Inc., with Eduardo Fierro and Cynthia Perry.

In 2010 he was awarded the Rose School Prize for his “long and distinguished career, during which he emphasized the need to understand structural performance under seismic attack, and to learn lessons from structural damage and failure in earthquakes. He led a whole new field of research emphasizing the importance of energy demand and capacity in seismic performance.”

Watch a video of the ROSE Prize Awarding Ceremony - 2010 Edition