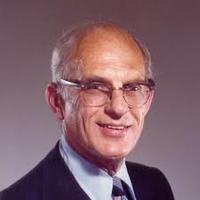 Born on July 23, 1920, Ray W. Clough was professor emeritus of civil and environmental engineering at the University of California, Berkeley. From 1950-1995 Professor Clough significantly contributed to the field of earthquake engineering through teaching, research and consulting. He is renowned for pioneering the field of earthquake engineering, and his most important research contribution in structural engineering was as a co-developer in the “Finite Element Method,” beginning with a classic paper in 1956 that he co-authored, which forever revolutionized the field of structural analysis and design of buildings and other structures such as dams, as well as many other disciplines that now use this method for analysis. His co-development of the method stemmed back to 1953 during research he conducted with engineers at Boeing. He was an early visionary of the capability of increasingly powerful computers in conducting structural analyses that would have been impossible only a few years before. In the 1960s he developed a series of publications that contained pioneering methods for computer earthquake analysis of tall buildings, which became the basis for commercial computer programs, such as SAP 2000, now standard in engineering practice. He co-authored the definitive text still widely used today, Dynamics of Structures, with Joseph Penzien, in 1975.

In the 1970s Professor Clough was Director of the Earthquake Engineering Research Center at Berkeley, the predecessor to PEER – Pacific Earthquake Engineering Research Center, and a hub for analytical and experimental earthquake engineering research, information resources, and public service programs. Clough worked with Professor Joseph Penzien on the design of UC Berkeley’s shaking table, one of the world’s largest multi-directional shaking tables, whose innovative features were later adopted by tables in Japan, Mexico, and Peru.

In 1994, President Clinton presented Professor Clough with a National Medal of Science “for his outstanding contributions in the fields of finite element analysis, structural dynamics, and earthquake engineering which had extraordinary influence in the development of modern engineering.”

UC Berkeley hosted the Clough-Penzien Symposium in 2002 for emeritus professors Ray Clough and Joseph Penzien, in recognition of their major contributions in computational structural mechanics, earthquake engineering, and dynamic experimentation of structures.

In 2006 Professor Clough was awarded the Benjamin Franklin Medal in Civil Engineering “for revolutionizing engineering and scientific computation and engineering design methods through his formulation and development of the finite element method, and for his innovative leadership in applying the method to the field of earthquake engineering with special emphasis on the seismic performance of dams.”

In 2008, at the 14th World Conference on Earthquake Engineering in Beijing, China, Professor Clough was recognized as one of the “legends of earthquake engineering.”

The impact of his work and his legacy in the field of earthquake engineering will continue through the generations of students he taught, advised, and mentored in his nearly 40 years at UC Berkeley.